Over on Facebook, there's a thing going round where you are nominated to post the 10 albums that have influenced your musical taste. No explanation or review is part of the challenge, so I'm linking here in my Facebook post to provide some background in the unlikely event of anyone wanting any.

I had just started secondary school when the Peter Gabriel era of Genesis was happening. I remember listening to Foxtrot and Selling England By The Pound at a friend's house, and later at university we listened to the back catalogue, with all its strangeness. We debated whether any of the albums after Gabriel were as good and compared them to other 'prog' rock of the era - Yes, Pink Floyd, King Crimson etc.

Aside from the musical merits and the strange and, at times, pretentious lyrics they have a particular sound to them. As well as Peter Gabriel's distinctive vocals and lyrics, the eerie sound of Mellotrons, tricky drumming and unexpected chord sequences intrigued me. Not sure how early Genesis has influenced me, but somehow I couldn't leave it out. 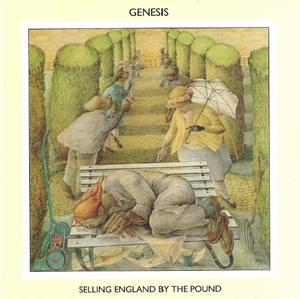 As a PS I probably ought to say I also likes some of the later material - notably the Genesis album of 1983, and I saw them live in 1987. But although it's not exactly cool to say so, I can't help wishing I could have been there for an early gig like some of my [older!] friends.