The first anniversary of Debbie's death was inevitably a strange day, but I have to say that the date itself hasn't usually had a great impact on me in the years since. The more poignant moments are usually prompted - at least for me - by finding a photograph or a memento, hearing a piece of music, or even in visiting places that were significant for us. 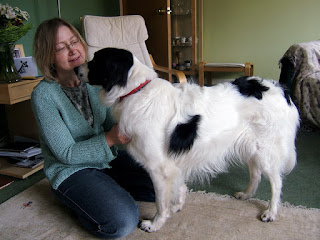 Today marks five years since Debs died, and I found myself thinking about her and what happened a little more than usual. Perhaps 5 years is some kind of subconscious threshold, or maybe it is because bereavement feels quite current, as I took a funeral yesterday, we've had a death in the family, and there is a rather significant funeral on Saturday.
Whatever the reason, it prompted me to think a bit about the enduring impact of bereavement that I have seen in myself and in others over the years. One thing people often reflect on - especially when the person is younger - is what might have happened, or what might they have achieved. And I can understand the temptation to spend all your time and energy yearning for a kind of parallel universe where they are still with us.
However, if having a faith that believes in life beyond this means anything, it has to mean that whatever seems unfulfilled in this life, it does not remain so for eternity. The gifts we received from the person who has now died are not wasted; neither is their potential wasted, even if we won't see it in this life. It's hard to put exactly what I'm thinking and feeling into words, so I'll leave you with Nothing Good Is Wasted, a song by my good friend Rob Halligan.
Posted by Mike Peatman at 3:06 pm

Thank you Mike. Been thinking of you all today. Your reflection and the song have clarified what I've been looking for. Still miss her

Dear Mike, I can feel your emotions in the words as I read them. The song sums it all up. Debbie made a dramatic impact on my spiritual life for that I am indebted to her. I played the Morecambe Gloria this morning, using a piano version of the tune in the background as I sang the words I put on my screen. I still talk about her in some of my sermons. How you feel I can not imagine. Nothing good is wasted and nothing good is lost. Chris x

Thank you Mike. Beautiful words. I think often of Debbie, always remember her laughing.
Doing sign translations at St T's are some of my best memories
Liz Warren-Corney

Thank you Mike. Bless you! I am so thankful for the impact Debbie made in my life. I sill miss her wisdom.

Lovely words. Thinking of you, Jono and Ellie.
I miss Debbie still. She was such a calm presence xx