You probably weren't expecting that. Let me explain.

At the end of February half-term I had a day off. It was a lovely sunny day, so as trains were running, I went up to Pickering and took a journey on the North York Moors Railway all the way to Grosmont. It's a wonderful little place, complete with a picturesque station and a special Coop all of its own 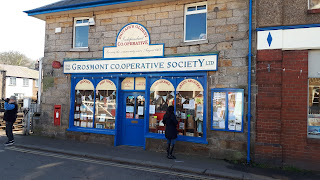 As there was plenty of time, I decided to walk the Rail Trail back to Goathland and then catch the final train to Pickering from there. It's a decent length walk, but it follows the original tramway, built by George Stephenson that was replaced by the current railway. As a result it's a nice wide path, mainly flat, apart from quite a long, steady incline into Gothland itself.

Near the start of the walk, I noticed this sign


It turns out that EU funding helped to make the Rail Trail happen. This small, fading label is the only evidence and reminder that that was the case (unless you download the linked leaflet and read the smaller print.) And all over the UK, I suspect that there are plenty of other projects and developments where we are completely unaware that EU money made it happen, as we aren't always very good at signposting it. A key part of debunking the £350 million a week on the side of the bus was the fact that a lot of EU funding flows back - including the "Thatcher rebate", payments for agriculture etc, funding research, Erasmus student scholarships, and funding for regional development. 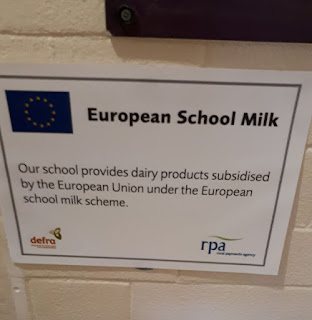 Now at this point if any enthusiastic supporters of brexit have got this far, they might raise the fact that this funding is not completely under the control of the UK government. Let's be clear - that is true. In fact, I would suggest that is an advantage. A government of whatever political persuasion will always be susceptible to the temptation to be more generous to certain areas than others out of political concerns. Not exactly buying votes, but it helps. If the strategic allocation decision is taken further away, based on criteria agreed by all member states, then it has a much better chance of being free from party political bias.

Back in the 1980s, I was in Durham, and I remember people talking about how European funding provided significant funds for the North East as it lost its traditional industries. In the aftermath of the miners' strike and then pit closures, it meant that interest and initiative was taken, even though business parks and restoring the landscape couldn't bring back those traditional jobs. Similarly, Wales has received substantial funds. I looked it up: £3.8bn between 2007-2020 via European Structural Funds investment, helping support employment, training and research, £957m between 2014-2020 via the Rural Development Programme, supporting businesses, farmers and communities and £200m a year Common Agricultural Policy, helping 16,000 Welsh farms. Likewise, Cornwall has also had substantial EU regional funding. The sad irony is that these regions generally voted leave in substantial numbers.

Leave voters might say at this point that as the UK government won't be paying into the EU, it can do its own grants. However, we have yet to see enough political commitment to do so (and just at the moment it's hard to see who is in charge anyway!) The UK government did announce a "Stronger Towns Fund", but we have yet to see detail about the "Shared Prosperity Fund". What is clear is that the latter would need to send a lot more money to Cornwall, if it is to match what was scheduled to come from the EU. It looks like brexit will redistribute funds around the country, and the likelihood is that Eastern England and the South West will lose out.

Some of these changes might be desirable, but I'm not an expert so I don't know. What I do know is that when we voted in the referendum in June 2016, nearly all of us had no idea what impact our vote might have on the regional development funding our area would receive. If only we'd paid more attention to those little logos when we saw them, we might have asked more questions before we cast our vote.