It was inevitable that this year would see an increased emphasis on remembrance as we marked the centenary of the outbreak of the First World War earlier this year. The monuments, memorials and most of all the commemorations on Remembrance Sunday are all part of the way our nation came to terms with its terrible death toll of between 7 & 800,000 (depending on which records are used). It's a staggering loss of life, and yet only a fraction of the number of people killed overall in the 14-18 conflict.

Armistice Day itself (11 Nov) was adopted as a public holiday by several nations, but in the UK, the outbreak of World War 2 led to the moving of the commemoration to the nearest Sunday - it was less disruptive to war production (which has its own irony). That is where the main ceremony has stayed since, although 11/11 has acquired a greater significance in recent years. That has led to some confusion. For example, here in Morecambe we had the main town ceremony on Sunday with over 1,000 people present and many organisations taking part. However, people were still asking about what was happening on 11/11 at the cenotaph with a sense of disappointment that it was not a major event. But for those of us there on Sunday, it would feel strange to be back doing the same thing again so soon.

It begs the question as to whether we need a new national consensus on which day we should use, and where remembrance begins and ends. Some people have argued that the UK should have a Bank Holiday between August and Christmas, perhaps relocating one of the holidays in May. One option might be to use 11/11. If we did that, then all UK ceremonies could take place on Armistice Day and there would be no parallel ceremonies or repetition. Our remembrance would be focussed on the one significant date when the guns fell silent.

It's also interesting which conflicts get included and which don't. Prior to 1914, relatively few war memorials were made. There is a very rare Crimean War memorial in my home town of Beeston. And I suspect that many people miss the fact that our church building contains a Boer War Memorial: 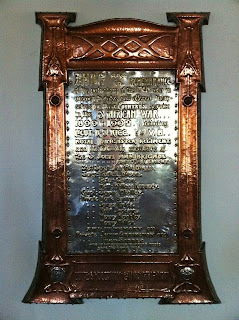 It's interesting that a war that ended at the start of the 20th century with over 20,000 British and allied dead (there were similar scale losses in Crimea) ends up being almost completely overlooked. Possibly it's due to there being some lasting unease about the conduct and legacy of parts of that campaign.

Of course the important thing is not the physical memorial, but the knowledge and appreciation of the cost and destructiveness of war. When memorials say 'lest we forget', it's a sobering reminder that the tragedy of bereavement represented by each name was repeated thousands and thousands of times up an down the country, and that should be all the motivation we need to inspire us to work ceaselessly for peace and reconciliation.