Journey Through the Past: 1

If you're a Neil Young fan (like me), and you just googled the title of this totally weird film and album, sorry - this is about something else altogether. I heard the album long ago; the film I have never seen. Anyway, back to the post...

As I'm starting to learn more about my future home town of Morecambe, it has made me think a lot about some of the places I have worked and lived in previously. My first ordained job was a curate at St Mary's, Greasley. 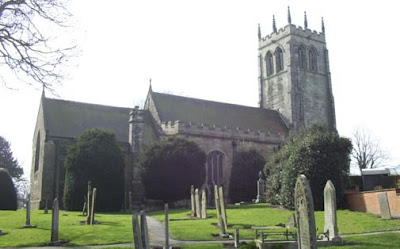 Greasley is both a church and a civil parish on the Notts/Derbys border, and includes part of Eastwood. The Church is in a lovely rural setting, although the parish had 14,000+ residents when I was there! It goes back to the Domesday book and has lots of associated history. Eastwood is famous for two things: 1) D.H.Lawrence was born there, and 2) the Midland Railway was formed at a meeting at the Sun Inn.

Greasley Church itself features in at least two novels - it's Minton Church in Lawrence's Sons and Lovers and Willey Green Church in Women in Love. When a tea-shop was proposed, I suggested they call it Minton's, which survives as a name to this day at the excellent tea rooms run by Judy and Roger. (Minton is also a make of china tea sets, of course) Greasley also inspired a Lawrence short story called A Fragment of Stained Glass which draws on the fact that glass from nearby Beauvale Priory depicting St Lucy and St Agatha was found in the farmhouse built on the site and transferred to Greasley. The conversation depicted was probabl imagined in the huge old vicarage, which still stands across the road from the church.

Something I've just noticed is that the Beauvale Priory ruins may be open to the public soon, which will make a small tragic piece of Reformation history accessible. The last Prior was one of the first martyrs, and is commemorated by an annual pilgrimage by the Catholic Diocese.

Apparently Eastwood is an excellent example of the region's distinctive accent, although coming from Nottingham myself, it's all very familiar to me! They always get it wrong on films and TV dramatisations; everyone sounds Yorkshire. The challenge now is whether I ever manage a convincing Lancashire through living up here.
Posted by Mike Peatman at 3:30 pm

Email ThisBlogThis!Share to TwitterShare to FacebookShare to Pinterest
Labels: life